Green hydrogen is the one H2 produced with virtually no harmful greenhouse gas emissions. Green hydrogen is made by using 100% clean electricity from surplus renewable energy sources, such as solar or wind power, to electrolyse water. Electrolysers employ an electrochemical reaction to split water into its components of H2and O2, emitting zero CO2in the process.

Through electrolysis, the electrolyser system creates hydrogen gas. The oxygen that’s left over is released into the atmosphere or can be captured or stored to supply other industrial processes.

In its simplest form, an electrolyser contains a cathode (negative charge), an anode (positive charge) and a membrane. Water electrolysis is an electrochemical reaction which takes place within the cell stacks. Electricity is applied to the anode and cathode across the membrane and causes the water (H2O) to split into its component molecules, hydrogen (H2) and oxygen (O2).

There are three main types of electrolysers: proton exchange membrane (PEM), alkaline and solid oxide. These different electrolyses function in slightly different ways depending on the electrolyte material involved. Both alkaline and PEM electrolysers are able to deliver on-site and on-demand hydrogen, pressurized hydrogen without a compressor and 99.999% pure, dry and carbon-free hydrogen.

Green hydrogen currently makes up a small percentage of the overall hydrogen because production is expensive. Just as energy from wind and solar power has reduced in price, green hydrogen will come down in price as it becomes more common.

Blue hydrogen is produced mainly from natural gas, using a process called steam methane reforming (SMR), which brings together natural gas and heated water in the form of steam. The output is hydrogen – but also carbon dioxide as a by-product. That means carbon capture and storage (CCS) is essential to trap and store this carbon.

Steam methane reforming (SMR) is a process in which methane from natural gas is heated, with steam, usually with a catalyst, to produce a mixture of carbon monoxide and hydrogen used in organic synthesis and as a fuel. In energy, SMR is the most widely used process for the generation of hydrogen. In SMR, methane reacts with steam under 3-25 bar pressure in the presence of a catalyst to produce hydrogen, CO, and a relatively small amount of CO2. Steam reforming reaction is endothermic, i.e., the process requires heat for the reactions to occur. In a “water-gas shift reaction,” the carbon monoxide and steam are reacted using a catalyst to produce carbon dioxide and more hydrogen. In a final process step called “pressure-swing adsorption,” carbon dioxide and other impurities are removed from the gas stream, leaving essentially pure hydrogen. Steam reforming can also be used to produce hydrogen from other fuels, such as ethanol, propane, or even gasoline.

Steam methane reforming is the most widely used process for the generation of hydrogen. This is largely due to its cost effectiveness in obtaining a high level of purity in its produced hydrogen. The hydrogen obtained from SMR can be used in industrial processes and in fuel cells because of its purity.

Although hydrogen itself is an emission free fuel, the feedstock to produce the hydrogen often comes from natural gas which results in the emissions of greenhouse gases. Additionally, the SMR process requires vast amounts of heat and is therefore highly energy intensive.

Carbon Capture and Storage (CCS) is a way of reducing carbon emissions, which is key to helping to tackle global warming.

Capturing the carbon dioxide for storage

The CO2is separated from other gases produced in industrial processes, such as those at coal and natural-gas-fired power generation plants or steel or cement factories

The produced CO2is then compressed and transported via pipelines, road transport or ships to a site for storage

The CO2 is injected into rock formations deep underground (such as saline aquifers or depleted oil and gas reservoirs that typically need to be 1km or more underground) for permanent storage.

Currently, this is the most common form of hydrogen production. Grey hydrogen is created from natural gas, or methane, using steam methane reformation but without capturing the greenhouse gases made in the process (it doesn’t include CCS or CCUS).

The coal gasification process begins with partial oxidation, which means some air is added to the coal, which generates carbon dioxide gas through traditional combustion. Not enough is added, though, to completely burn the coal – only enough to make some heat for the gasification reaction. The partial oxidation also makes its own gasification agent, CO2.

Carbon dioxide reacts with the rest of the carbon in the coal to form carbon monoxide (this is the endothermic gasification reaction, which requires heat input).

Carbon monoxide in the gas stream is now further reacted with steam, generating hydrogen and carbon dioxide. The hydrogen can then be run through an on-site fuel cell to generate high-efficiency electricity.

Brown coals are generally preferred for gasification over black coals for several reasons, which makes the brown coal a good prospect for this process.

The main reason is that, because of the high oxygen content of this type of coal, it is less chemically stable and therefore easier to break apart during the gasification reaction. Additionally, there is a small boost from the hydrogen that is already embedded in the coal.

Hydrogen produced in this way is not a zero-emission fuel. Carbon dioxide is emitted through the combustion and thermal decomposition reactions and is also a product of the reaction between carbon monoxide and water to make hydrogen and carbon dioxide. This is why the black and brown hydrogen require CCS and CCUS solutions to become carbon neutral.

Japan and Australia announced a new brown coal-to-hydrogen project recently. This project will use brown coal in Australia to produce liquefied hydrogen, which will then be shipped to Japan for low-emission use. 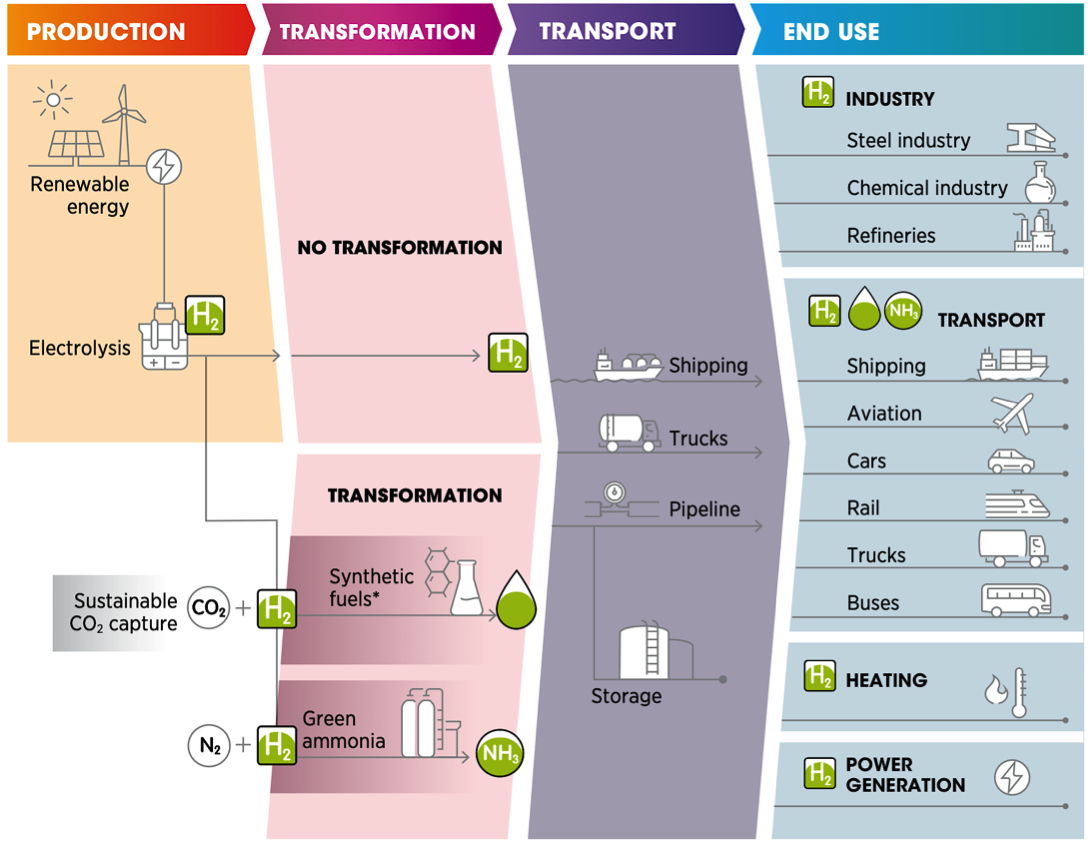 Pink hydrogen is generated through electrolysis powered by nuclear energy. Nuclear-produced hydrogen can also be referred to as purple hydrogen or red hydrogen.

In addition, the very high temperatures from nuclear reactors could be used in other hydrogen productions by producing steam for more efficient electrolysis or fossil gas-based steam methane reforming.

This is not available in Australia.

This involves a process called natural gas pyrolysis (methane cracking). In the absence of oxygen, methane is decomposed into hydrogen and elemental carbon at high temperatures, usually in the presence of a catalyst. Methane pyrolysis is a fundamentally new process technology that splits natural gas or biomethane directly into the components hydrogen and solid carbon. This process requires relatively little energy (although the process has an operating temperature of >500°C). And if it uses electricity from 100% renewable sources, there are no greenhouse gas emissions. This is an idea that has existed since the 1960s but has always failed due to challenges linked to technical implementation.

The process is unique because it utilises natural gas (CH4) to produce low-CO2hydrogen without the need for CCS (carbon capture and storage) whilst also producing a marketable by-product: elemental carbon powder.

Being an emerging technology – the projected median life cycle emissions of methane pyrolysis are (anticipated to be) lower than steam methane reforming and coal gasification estimates, but higher than electrolysis and biomass gasification methods. The theoretically achievable efficiency value at commercial scale for this technology is estimated to be around 55%

As a by-product, high purity carbon powder is produced; potential applications for such a product can include carbon black used in tyres and inks; activated carbon used in water purification and more exotic forms like graphene and nanotubes for use in electronics and composite.

Unlike all the other technologies, turquoise hydrogen doesn’t require water as a medium and it has huge potential in various states in Australia that don’t have available quality water in huge volumes (such as South Australia). Let’s not forget that for every litre of water used we can produce (in theory) 111.19g of H2 and 888.81g of O2if we have 100% efficiency. At normal 70% process efficiency, we get roughly only 78g of hydrogen and 622g of oxygen per litre of water from the electrolysis process (green hydrogen) with a volume of 870 litres (H2) and 438 litres of O2.

Despite availability of renewables and decrease in costs of both solar and wind power, green hydrogen can be produced only in those parts in Australia where water is abundant. Such as Queensland, Northern WA and Northern Territories. Challenges remain for blue and brown hydrogen as well, because they both require a lot of steam (water) in the process, and while desalination plants provide and alternative water supply to the natural freshwater sources available, the costs associated with producing hydrogen this way will completely kill the economic prospects of any such large-scale project.